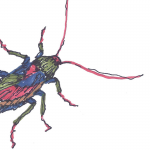 I caught motion in my peripheral vision – driver’s side window. It was over an inch and a half long, reddish brown. It was in the car with me as I drove 65 mph in the middle of six lanes of freeway traffic.

I was driving home from my weekly writer’s critique group. Why were so many other drivers on the Katy freeway? It was after 9 pm. Don’t these people have a life? It had been a long day; I was whipped. But it didn’t keep me from thinking of a question I heard on the Sensory Processing Disorder Internation Forum, “What music do you stim to?”

What do you do to keep from zoning out when driving in mind-numbing traffic? I queue up my Road Trip Retrospective playlist.

I caught motion in my peripheral vision – driver’s side window. It was over an inch and a half long, reddish brown. It was in the car with me as I drove 65 mph in the middle of six lanes of freeway traffic.

I instantly identified it as the only insect guaranteed to give me the heeby-jeebies – Periplaneta americana. To folks not fascinated by bugs – a freakin’ BIG cockroach.

**In an experiment carried out at UC Berkeley in 1991 (most likely in the hallway of an all-male dormitory), a Periplaneta americana registered a record speed of 50 body lengths per second, which would be comparable to a human running 210 miles per hour.**

For those of you unfamiliar with the term, it means “self-stimulatory behaviors.” They are innate survival skills employed by people whose nervous systems fail to modulate accurately. By self-stimulating and self-soothing, we manually ratchet our internal levels of stimulation up or down to more appropriately respond to our environment or situation.

I’ve been stimming since I was a baby but didn’t understand why until a few months ago when I learned about Sensory Processing Disorder.

There is this HUGE cockroach zipping across the weather stripping of the driver’s side window, inches from my shoulder. Every cell in my body screams, FLEE!

I’m the queen of stimming:

But until I read that question on the SPD Forum, I never made a conscious connection that I stimmed to music as well.

Periplaneta zigzags to the tiny triangular window at the corner of the dash and the windshield. Beyond his armored body I see the back bumper of a semi-trailer. There’s a car directly in front of me and a string of SUV’s to my right, blocking the first of two lanes I have to cross to exit the freeway.

Creepy Crunchy turns in place, fourth set of legs to the window, two-inch-long antennae waving my general direction. He’s likely wondering how short a flight it is to the source of that pina colada aroma – the cream-rinse in my hair.

I imagine Paul Pendergraft on the KUHF morning news, somberly relaying the death toll from “last night’s mysterious twenty-car pile up on Interstate 10.”

For the first time in a long time, the situation matches Lizzy’s knee-jerk setting of ten on the Fight, Flight or Freeze scale. There can be no fleeing. And freezing is hardly an option. If the steering wheel were made of anything less sturdy, it would have squished out the sides of my clenched fists.

I keep my eye on Ugly in the corner and monitor the high speed traffic on all four sides, while scoping the car’s interior for anything I can use as a weapon.

Having lived on the Gulf Coast for 25 years, I am no stranger to killing giant cockroaches. They typically live outside but every now and then one will squeeze under a door or through a plumbing hole into the house. They come looking for water or warmth. What the hell is this one doing in my car?

Outside or in the garage, my motto is live and let live. Once I spot one inside the house, though, I can’t rest until it’s dead. I have honed my ability to stalk and exterminate Mr. Americana over years of trial and error. Best to sneak up on him, and you need a clear shot because, when he realizes he’s being chased, he’s like a cloud of electrons – everywhere at once.

There is nothing within reach. My Pumas are the only thing suitable and they’re laced to my feet.

I’m limber and ambidextrous. I can remove a shoe at 65 mph. But with only three feet of clearance on either side of the car…and I can’t guarantee that if Periplaneta makes a sudden move in my direction I won’t respond like the hysterical teenage target in a horror movie.

In a stationary environment, the preferred hierarchy of cockroach execution methods goes as follows:

Recognize a pattern? Yeah, the more distance between my flesh and this erratic packet of bug guts the better. As my beloved grandfather – God rest his soul – used to say of the scorpion-like vinegaroons that haunted cool desert basements, “I know he can’t hurt me, but he can cause me to hurt myself.” (To Granddad’s consternation, I collected vinegaroons in mayonnaise jars.)

The best I can hope for is that he stays put. I’ve slowed to 55 mph. I’m blinking my intent to merge right. Cars are whipping past me.

Periplaneta darts four inches out of the shelter of the triangle just as iTunes shuffles to the next song.

He hesitates, right in front of me on the dashboard. Which way to scurry?

A drum rolls like a Sudafed-quickened heart beat, then a deep male voice: “It’s astounding.”

But it’s not ratcheting up or down. We’re already full-on. It’s a lateral move, out of dread and impending panic.

The music jumps me clean off the tracks.

Slowly, I slip the sleeve of my floppy sweatshirt over my right hand and grasp it closed in my fist. I thank my stars, and Dr. Demento, it’s an unseasonably cool night for May in Houston. And knowing I’d be out late, senses burdened, I dressed in the most comfortable article of clothing I own.

Bring it on, Periplaneta americana.

He zips across the dash in a high-speed drunken diagonal toward the passenger seat.

I watch the road, maniacal. My skin pulses electric ripples up my legs and arms.

“Not for very much longer.”

Americana’s nearly to the lip of the dashboard, dead center in front of the passenger seat.

“I’ve got to keep control.”

I jab with my right just before the crawly bastard disappears over the edge.

“I remember, doing the time warp!”

“Drinking those moments when,”

“The black mist would hit me,”

My whole body quivers in revulsion as, fully extended, I rotate my arm to check the bottom of my fleece-covered fist. He’s not there.

“And the void would be calling,”

A panicked Periplaneta slipping up my pant leg?

No! I grab my imagination by the throat, refusing to let it make that connection to the unbearable skin-crawling sensation electrifying my extremities.

“Let’s do the time warp again!”

Look. There’s a gooey spot on the edge of the dash.

“Let’s do the time warp again!”

…Yeah…so…what music do you stim to?

My favorite shoes are perfectly adequate for stomping Periplaneta
Americana, but I like them because they are soft, smooth and lightweight.

If Sensory Processing Disorder had been in the DSM

View all posts by admin

8 Replies to “Stimming with Cockroach on Freeway”