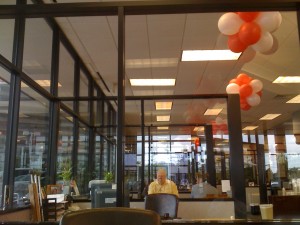 Thursday, my husband Watson and I spent two hours inside a noisy, bustling car dealership. It was the preliminary attempt to replace his 2001 F150 pickup with a Prius. Prius 2 we will call it, since we already own Prius 1.

I couldn’t block out the noise: conversation, traffic and piped-in music which bounced off every surface, but I had my iPhone. My favorite playlist, streaming through ear-buds, neutralized some of the noise. I wore a hat, which I have taken to doing almost all the time now, to shade the direct glare from the fluorescent lights.

One side of the showroom was lined with glass partitions that chopped the space into cubicles for the salesmen. The partitions were both transparent and reflective. It had the bizarre effect of mirror-facing-mirror infinity with each dimension having its own semi-transparent plane of uniqueness, including the parking lot dimension and the frenetic traffic-on-the-freeway dimension reflected from beyond the glass storefront three cubicles behind me.

I kept my eyes closed every minute I could.

But I could use neither iPhone nor direct visual blockage while negotiations were underway.

Keeping the car salesman from screwing us demanded all the joint concentration Watson and I could muster.

I believe they intend it to be that way. They learn “wear them down” tactics in car salesman school.

We had decided upon the exact car we wanted, had negotiated a price and were waiting for the salesman Cal (not his real name) to execute his second trip to visit with his manager for the absolute, most special interest rate he could possibly negotiate on our behalf. But I had reached my limit. The muscles on either side of my spine had contracted into steel cables which skewered up my neck and into my brain throwing my jaw out of alignment.

“We need to wrap this up,” I said to Watson.

“Right,” he replied, like I had just asked for a snow-cone in hell.

“It’s not practical under the circumstances to try to explain a hyper sensitivity shutdown. Let’s tell him I am on the verge of a migraine.”

The salesman came back, effusively victorious in his battle to win 2.9% financing.

“Tell him about the trade in,” I said sweetly.

“We have a pick-up truck we want to trade in,” Watson said.

“No, we are going to have to come back at another time.”

Cal launched into a frenzy of salesmanship, moving in for the close. We had not yet signed a single document.

Watson shook his head, hoping to interject politely. It was futile. He interrupted, “She’s getting a migraine. We need to go now.”

“Can you give me just fifteen more minutes? We’ll get the car ready, you can drive it home.”

“Do you want to wait in the TV room?”

I was numb on the way home. I climbed into my bed and blocked the light coming through my window with a folded pillowcase over my eyes. I put my feet up and queued a meditation app on my phone.

Watson came in and rested with me for a few minutes.

“I know.” I felt around for his hand from my self-imposed darkness. I held it.

“That just wiped me out.”

Then he got up.

I hovered just above unconsciousness for what felt like five minutes before the cat, trapped on the wrong side of the closed bedroom door, expressed her dismay by running across the pillows and over the top of my head.

It had been an hour and I could only muster enough energy to feel sorry for myself.

Luckily, the day’s next most pressing responsibility was to walk the dog. That revived me to a level of functionality from which I edged a weighted blanket I’m sewing for a friend, watched two episodes of Mad Men on DVD and went to bed at a reasonable hour.

Stimming with Cockroach on Freeway

View all posts by admin