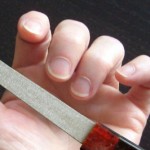 It is for the moms of young SPD children that I write about nail trimming. To anyone who would judge me for writing about such a ridiculously trite topic, I ask, “What the hell are you doing on my blog, anyway?”

So, Moms, let me bestow upon you 50 years of high-sensitivity nail trimming experience.

I work with my hands: I draw, type, sew, catch Frisbees, garden – things I cannot do comfortably or efficiently with long nails. When the nails get to a length where they interfere with my daily activities, or (more accurately) when they bother me unrelentingly, I clip and file them.

I never thought about it until you moms brought it up, but apparently I do not enjoy trimming my nails. My first clue – I procrastinate about it, a lot.

For the sake of journalistic accuracy, and because they needed it, I just trimmed my nails – like, an hour before I wrote this post.

I tried to stay in current awareness the entire time, mindful, like a Zen practitioner. The only emotion I could identify was boredom, underlined by an urgent need to get it over with as soon as possible. Afterward I noticed my temples hurt which means I clenched my teeth during the process.

Many of my neuro-typical friends are very attached to their regular manicures and pedicures. Their eyes-lids droop dreamily whenever they mention it. The thought of someone coming at me with an emery board rouses a vision of the ball of my foot planted squarely, if reflexively, in their solar plexus. That minute vibrating feeling – like an electric current on the ends of my fingers or toes is practically unbearable.
So, the truth is revealed: Nail filing is one of many sensations I can tolerate only if I personally control it.

I trimmed my nails from 3/16th of an inch to 1/16th. I am keenly aware of my newly exposed fingertips while I type this list of personal nail trimming trivia.

I trimmed Janie’s (my mom’s) toenails the last couple years of her life. She prided herself on not being ticklish. She was a poser. If I barely touched her toe with the clipper, she gasped and pulled away. We would let them grow until the pain of having them ridiculously long became greater than the trauma of clipping them. A couple of times she actually caused me to hurt her by pulling away just as I snapped the clippers. I threatened to have her sedated.

“That would be wonderful!” she replied.

I wish I would have remembered and used scissors like a couple of the SPD moms suggest. I remember using little scissors when my sons were infants. I trimmed their nails when they were asleep, which was how my mother-in-law told me to do it and I trusted her completely as she successfully raised five infants, one of which turned out so well I married him.

I don’t remember any bad times trimming my son’s fingernails or toenails as they got older. If it bothered them, they didn’t make enough of a fuss about it for me to remember. (Usually, if something like this comes up in conversation, they have more vivid, often contradictory, recollections that they are happy to share in great detail.)

I just realized — they both bite their fingernails.

As long as we are on the topic, let’s cover it completely.
Nail polish?
Forget it.

The few times I tried it in my teens and early twenties, the feeling that there was something on my fingernails that should not be there, never went away. Plus, the acetone needed to remove the polish burned my skin and my nose.

Because I am bound by rigorous honesty, I must confess, I have been known to wear toenail polish. It is an unspoken regional/cultural thing. (How do you know this if it is unspoken? You just do.) Living in Houston, we females wear sandals the majority of the year. It is considered uncivilized, except in rugged environments, to expose unpolished toenails. It is a conflict because I love to wear flip-flops. Lately, though, I just wear very soft, lace-up Pumas and avoid the suffering-for-beauty debate altogether.

In conclusion, the last time my sons’ nails were trimmed properly was probably when I did it twenty-five years ago. Yet, they have survived to adulthood. Both are in relationships with smart, beautiful women and they are both self-supporting.

Thus, I will share with you the advice that always served me best with issues regarding motherhood, “Try to relax – it won’t always be this difficult.”

Yes! Adults can be Over-Responsive to Sound in the Grocery Store

Coming Soon! The Sensory-Friendly Section of your Favorite Restaurant

View all posts by Lane